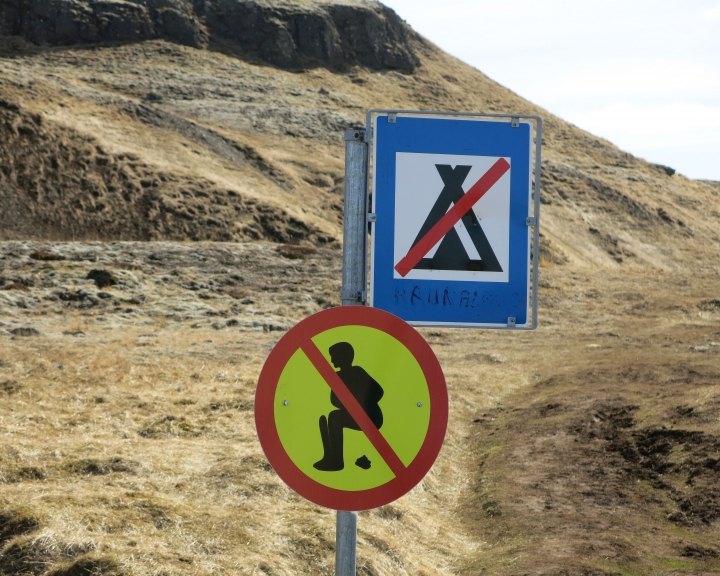 A new sign showing a squatting figure and a dark piece of something dropping from its behind is selling well these days in Iceland. As you may imagine, the piece shown dropping is what some of us politely refer to as number two. The reason for the popularity of the sign is that landowners are tired of tourists using their property as a toilet.

Þorsteinn Gíslason, owner of the sign-making company SG-Merking told RÚV he made the first such sign this summer. Other signs are also gaining popularity, including ones prohibiting camping and the flight of drones.

Farmer Guðrún Hauksdóttir in Ögur, Snæfellsnes, reports the signs are effective. “Last summer, there were 6-7 cars parked [in the farm’s driveway] every day, even though there is a campground nearby. Now that problem is history.”

The ‘Number Two Man’ can be seen squatting in various locations in West, South and Northeast Iceland, inside a round or a square frame.

The problem of tourists baking brownies out in nature became a flammable subject of discussion last summer after a tourist put his dirty toilet paper on fire in a lava field in West Iceland, causing substantial damage. Previously, a mother had allowed her children to defecate on a sidewalk in the town of Húsavík, Northeast Iceland. Those incidents brought attention to the fact that toilet facilities are often lacking.